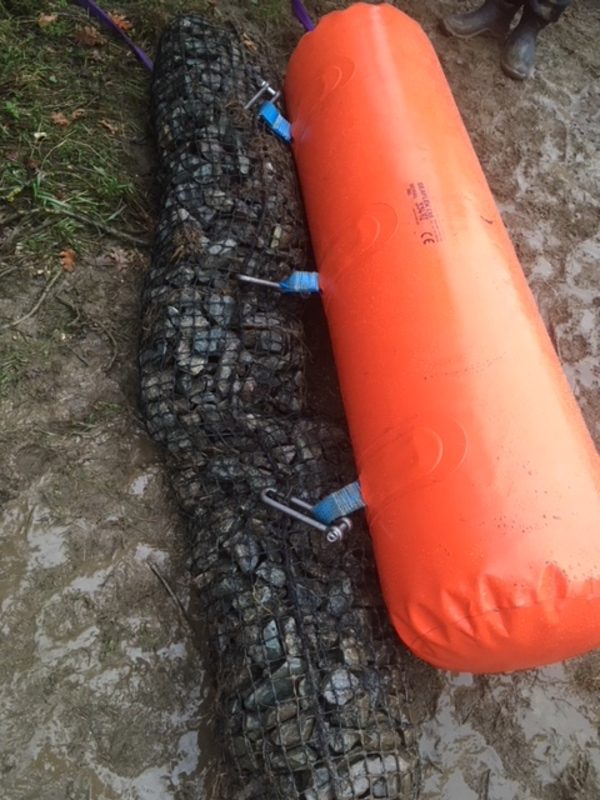 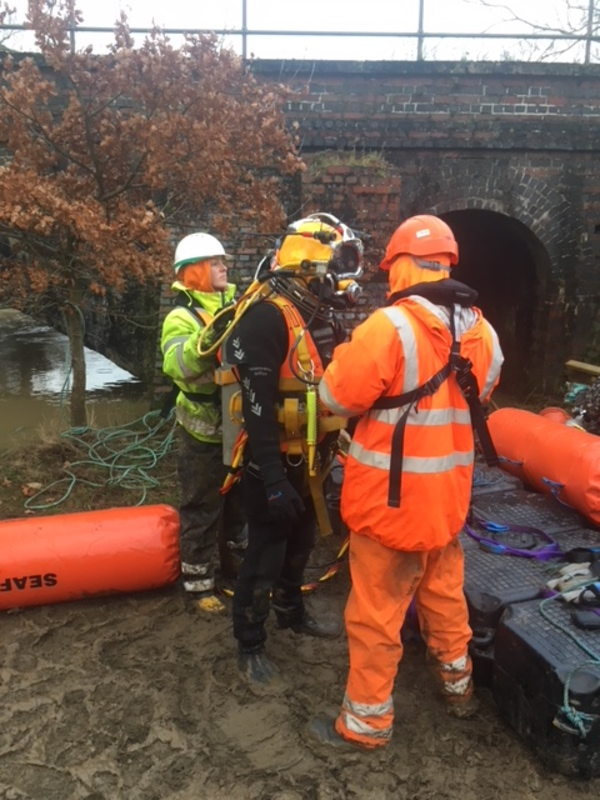 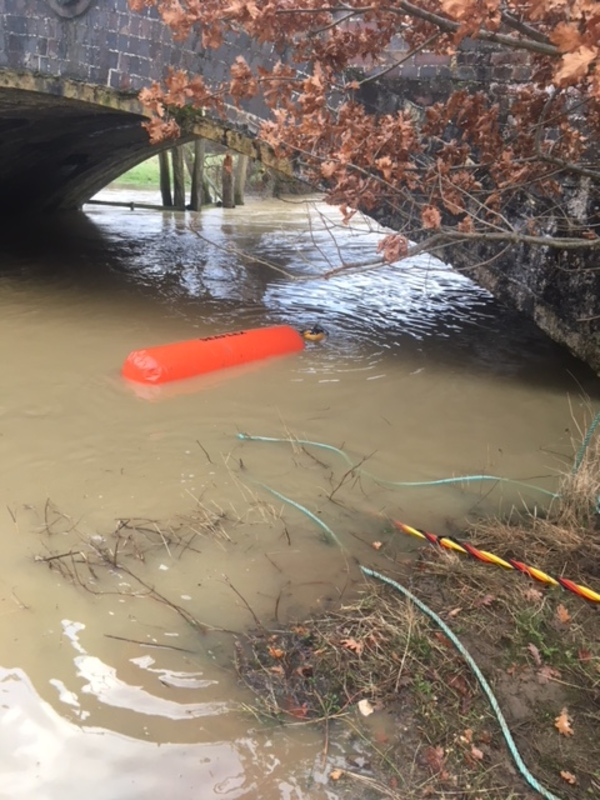 Due to sustained high water levels we worked with RS Divers from Portsmouth to complete the final scour protection project for Network Rail. The sixty rock filled netting rolls were floated into position before being lowered onto the the river bed where they are fastened to their neighbouring rolls creating a heavy river bed protecting mattress! 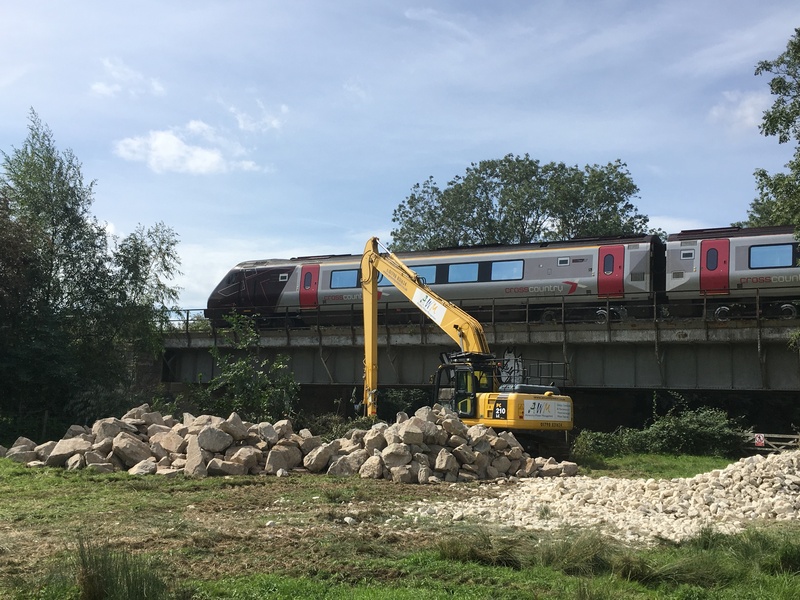 We have carried out scour protection works at four sites for Network Rail this summer. Granite rock armour and rock filled netting rolls were installed around bridge piers and on the banks at crossings over the River Little Dart and River Taw in Devon as well as the Rivers Cherwell and Evenlode in Oxfordshire. Due to sustained high water levels on the River Evenlode project the works were completed using RS Divers from Portsmouth to float the rock rolls into position using air bags before they are lowered to the bed and joined to their 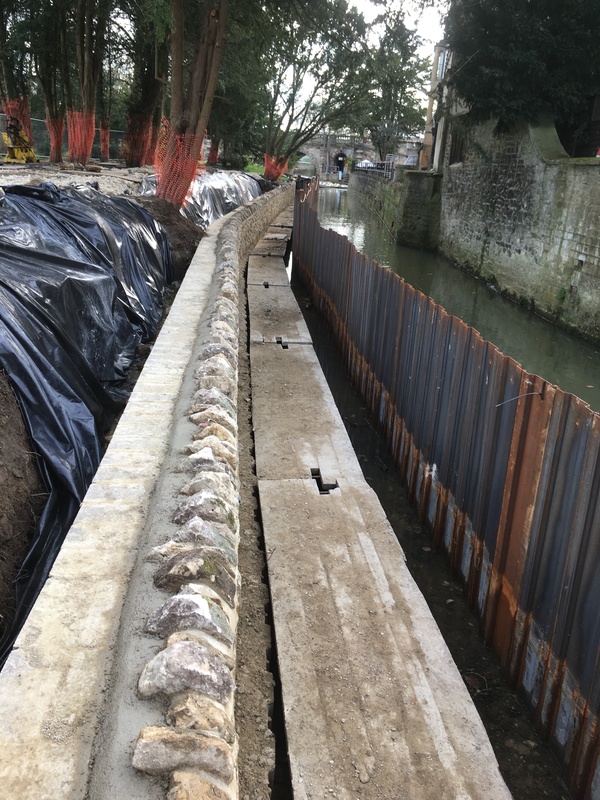 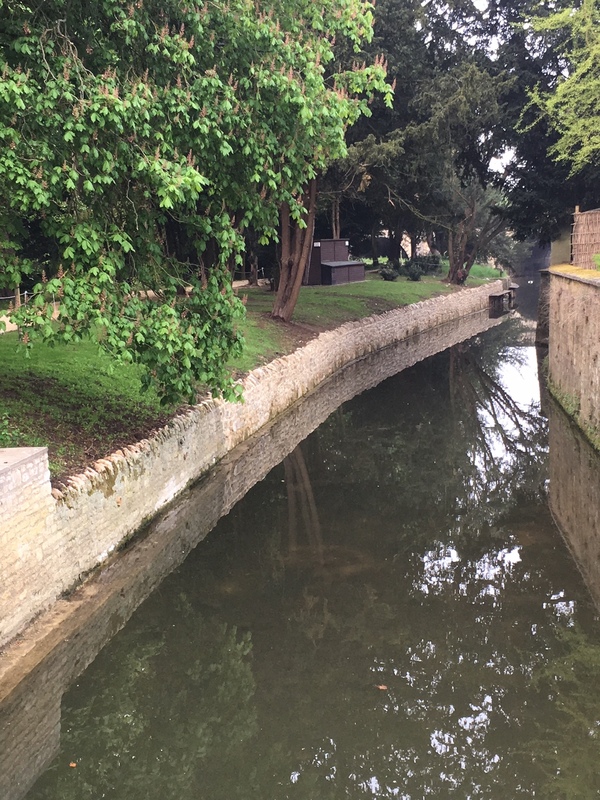 This 85 metre repair of ancient stone wall required new footings as well and so a temporary sheet pile dam was installed along with silent running electric pumps to enable works to be carried out beneath water level before the new wall was constructed above. 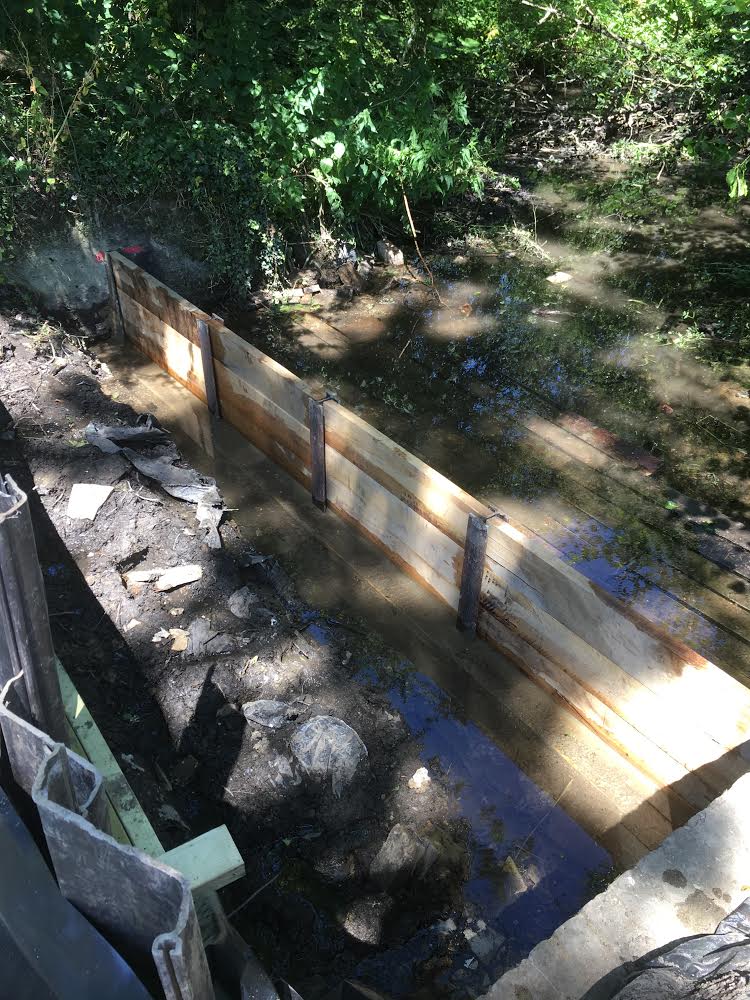 AWM were tasked to replace three weirs controlling water levels upstream of a mill on the River Mimram near Welwyn Garden City.

These weirs will be modified in due course as part of a project to improve fish passage through the catchment. 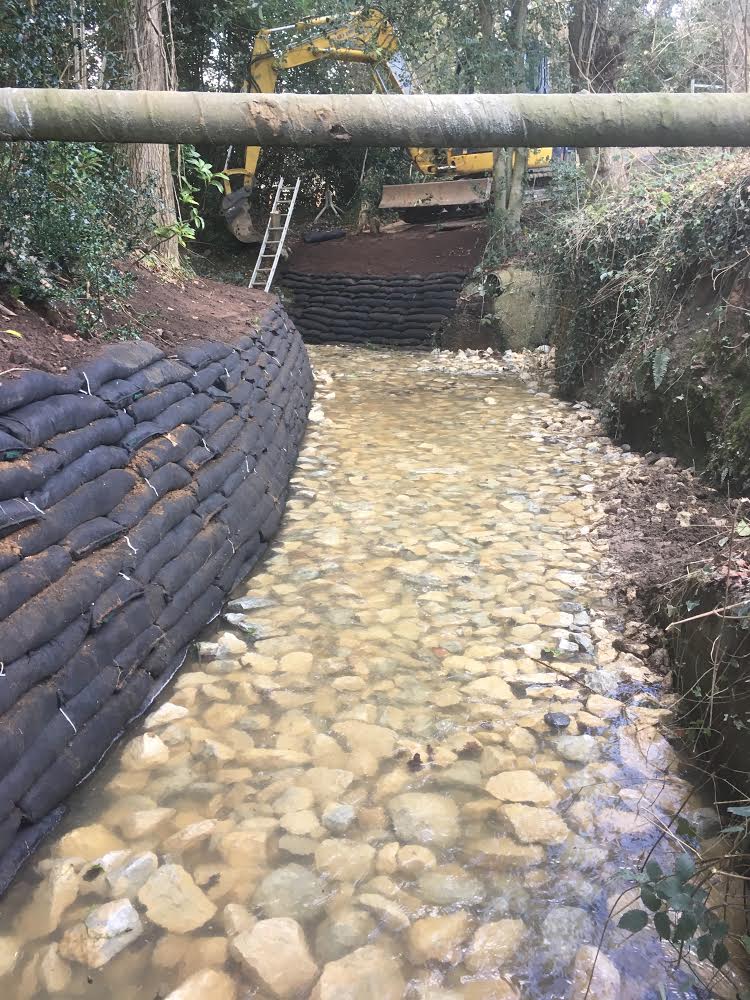 The banks were badly eroded on this stretch of the Alder Brook in Cranleigh, Surrey. AWM installed these soil filled Flex MSE bags for Waverley Borough Council which lock together with spiked plates to make them additionally secure. They will be hydraseeded with a suitable seed mix which will grow through into the soil in the bags to produce a soft green sustainable solution to a common problem. 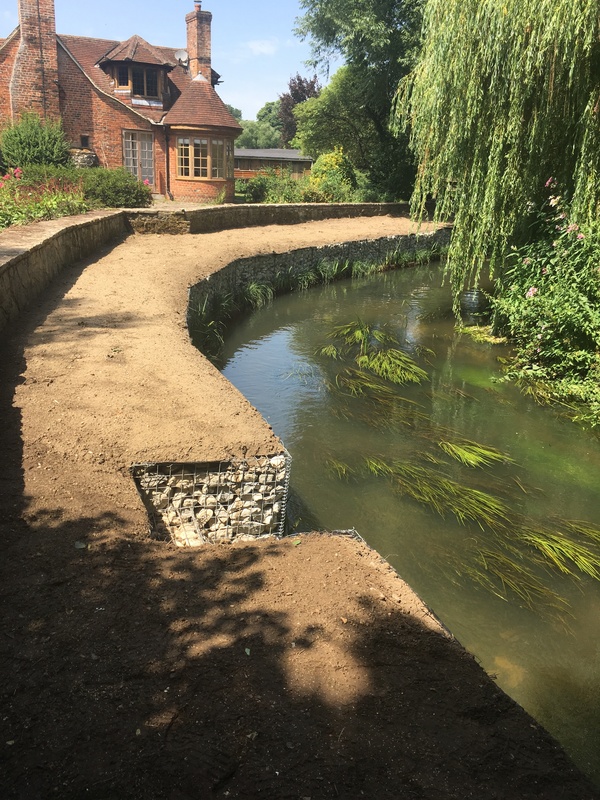 The previous attempts to protect this garden on an outside bend of the River Wey had failed and so we installed a robust stone filled gabion basket revetment on a sheet pile footing to prevent burrowing crayfish undermining our good work. Marginal planting formed part of the design as mitigation to wildlife and some steps were incorporated for wild swimming, presumably on very hot days! 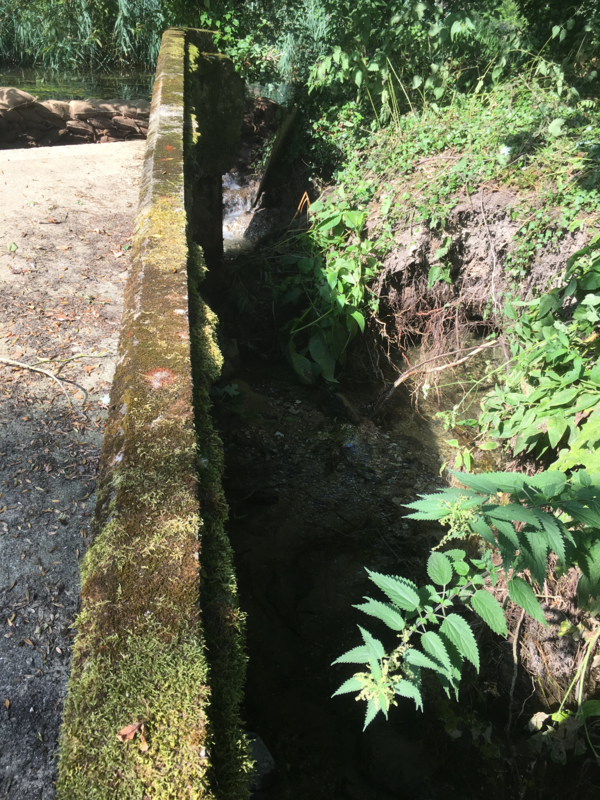 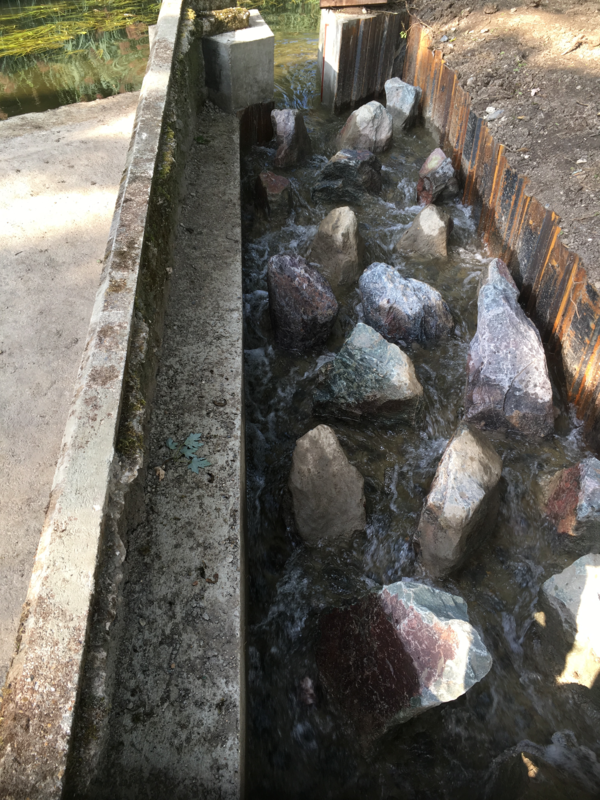 Rather than just repair, this breach adjacent to a spillway structure on a mill leat in Hampshire.  We took the opportunity to "upcycle" and create a rock ramp fish pass enabling fish passage past the mill for the first time in a few hundred years. 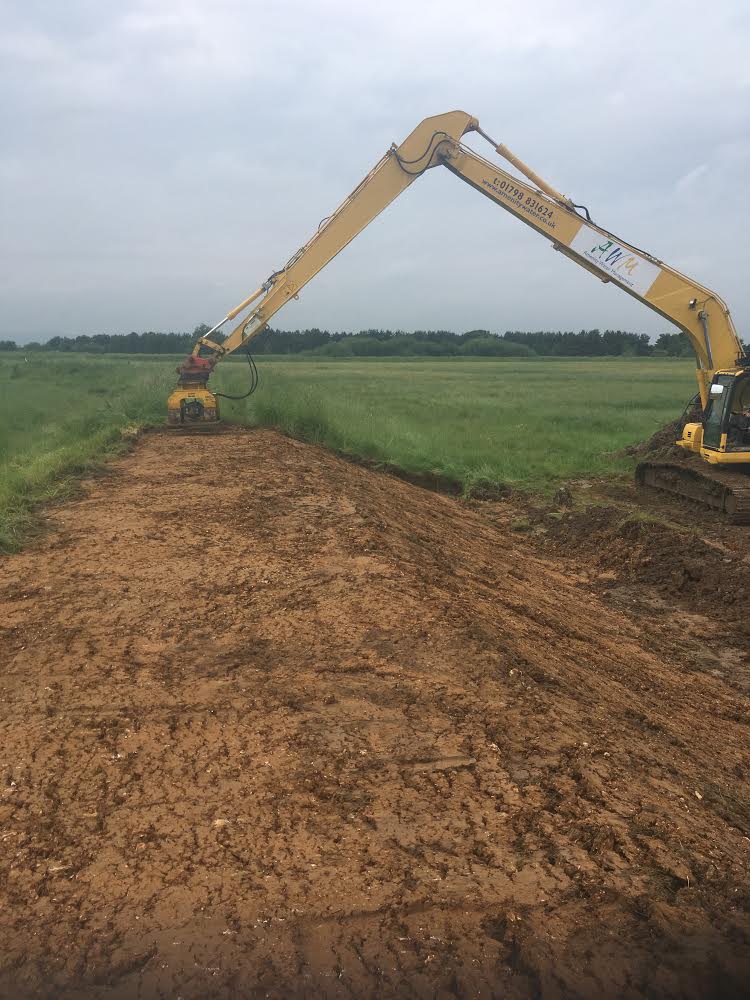 Works were completed in 5 areas around the historic town of Arundel to repair low spots in the flood embankments protecting the town and surrounding farmland from the tidal River Arun. The works were for the Environment Agency and lasted 8 weeks. In this photo a long reach excavator fitted with a vibrating plate compacts a blend of imported material to ensure a sound free draining repair. 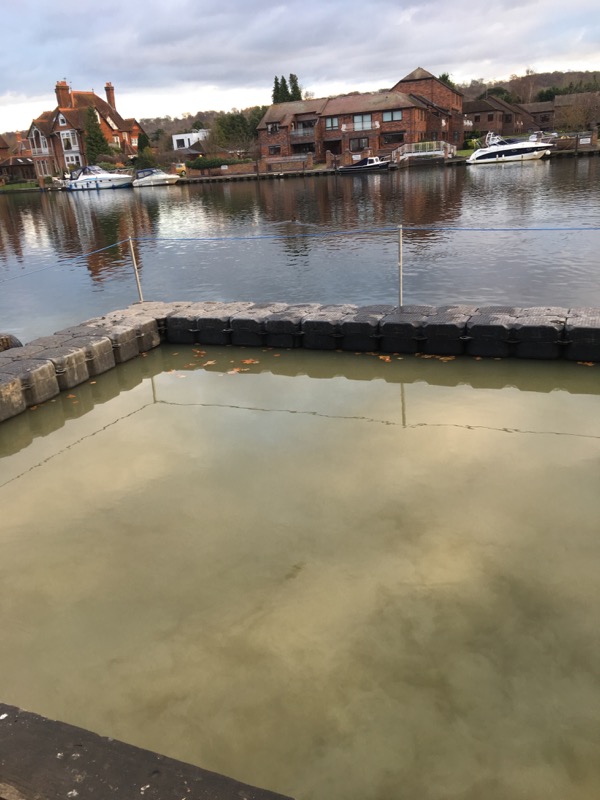 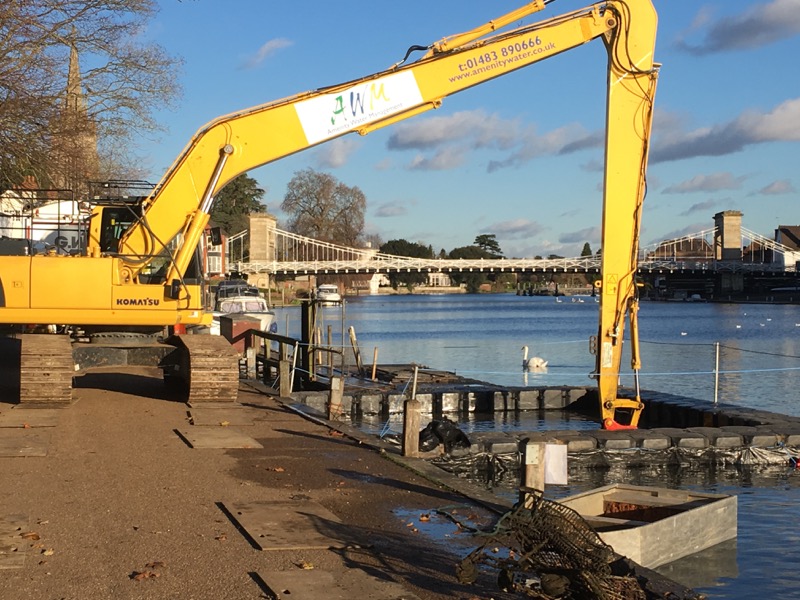